The death of the lumbering industry in the late 1800s helped bring about the birth of the sugarbeet industry to the Saginaw Valley’s farming and food-processing economies.

After loggers had cleared the pine forests in the area, the land was virtually unusable due to the massive expanse of tree stumps left behind. State and local leaders were searching for a substitute for the jobs and money generated by now-departed lumber barons. A solution was needed that could be replenished each year, bringing a stabilizing influence on the economic base of the region. 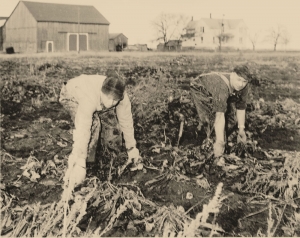 In 1839, Lucius Lyon, a skilled potato grower, decided he could transfer his talents to the planting of the sugarbeet. His growing project was successful, but the manufacturing system was not.

Interest in the sugarbeet was not revived until 1884, when Joseph Seemann, a Saginaw printer, happened to see how well the sugarbeet was doing for the people in a region of Germany that he visited. Another trip convinced him to send a sample of the seeds to his partner, who forwarded them to Dr. Robert C. Kedzie, professor of chemistry at Michigan State Agricultural College (now called Michigan State University). Dr. Kedzie’s enthusiasm for the beet’s potential in the region earned him the title “Father of the Michigan Beet Sugar Industry.”

He imported 1,500 pounds of seeds from France and distributed them to farmers across Michigan. The success of the planting helped encourage people to clear the stumps and better utilize the once-again valuable acreage.

Funds were raised by boiler manufacturer Harry T. Wickes, Thomas A. Harvey and grain merchant George B. Morley to underwrite beet-growing tests. Invitations to farmers for seed and instructions were issued. This resulted in bringing samples of beets from 600 farms to Dr. Kedzie’s laboratory.

“Three crops of beets,” he said, “grown in three successive years are worth as much as one crop of pine trees, which required 100 years to mature ”

Suddenly, the switch from “trees to beets” brought the stump lands back into productivity. 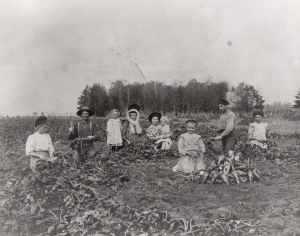 In 1897, the Michigan Legislature passed a bill offering the beet processors a bounty of one cent per pound of sugar produced in Michigan from Michigan-grown sugarbeets, provided that the farmers received at least $4 per ton for beets of 12 percent sugar.

The Business Men’s Committee settled on Bay City as the locale for Michigan’s “Pioneer” factory. As a result, the “Pioneer Michigan Sugar Company” was organized and on Dec. 9, 1897, the stock subscription list was closed and some subscriptions even had to be returned. The factory was built in the Bay City suburb of Essexville. 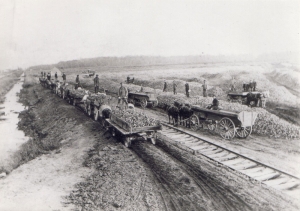 On Oct. 17, 1898, a smiling Gov. Hazen B. Pingree was on hand to officially begin the state’s first beet sugar campaign. The first processing season in the state’s history was, by every account, a remarkable success.

Farmers harvested an average of 10.3 tons of beets from each of 3,103 acres for a total of 32,047 tons of sugarbeets. The farmers were paid an average of $4.51 per ton of beets, an amount that immediately classified sugarbeets as a premier cash crop. The investors were delighted.

No crop in human history had held the potential for creating such a high return from so few acres. A farmer with above-average ability who placed 15 acres in sugarbeets could earn $900. If his family provided the bulk of the labor, the net profit would more than take care of a family’s needs for a year. After adding revenue from crops in rotation such as wheat, corn and beans, and revenues from milk, eggs and poultry, the farm family’s standard of living advanced from a subsistence level to one that compared favorably to those who held mid-management positions in industry. Sugarbeets established their reputation as a mortgage payer.

Official recognition by the U.S. Department of Agriculture in 1898 of the importance of the sugarbeet industry, combined with success of the Essexville plant, sparked rapid development. One year earlier, the nation had only 10 beet sugar factories. The construction of seven sugarbeet factories in 1898 developed into a boom by 1900 when the nationwide count stood at 30 beet sugar factories in 11 states.

In 1899, eight factories followed Essexville’s successful experiment in Michigan. The new factories were in Holland, Kalamazoo, Rochester, Benton Harbor, Alma, West Bay City, Caro, and a second factory in Essexville. Despite the lack of factory builders and the engineers to operate them, 14 additional factories rose on the outskirts of Michigan towns, from Marine City to Charlevoix to Menominee, during the next six years. 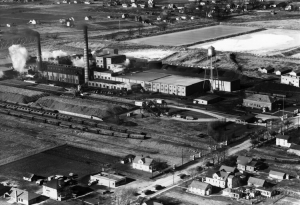 The Bay City factory, built in 1901 and named the German-American Sugar Company (which later evolved into Monitor Sugar Company), was the fourth in the city, giving it more beet sugar factories than any city in America.

More sugarbeet companies would have gone under had not H. O. Havemeyer’s powerful and experienced American Sugar Refining Company stepped in and provided a helping hand. American Sugar, sensing the profit possibilities of the Michigan beet sugar industry, bought a substantial stock interest in many of the local companies and gave them the benefit of technical and financial assistance they so badly needed. 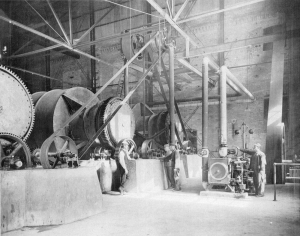 Only two of the original 24 companies remained 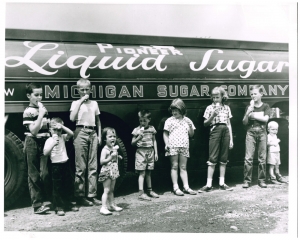 With the closing in 1954 of three factories (Menominee, Blissfield and St. Louis), only two of the original 24 companies remained. One was Michigan Sugar Company that was by then operating four of the nine factories it had acquired: Caro, Carrollton, Croswell and Sebewaing. The other was Monitor Sugar Company’s single factory in Bay City, which, from the late 1960s to the early 1980s, was under the leadership of Charles Coryell, whose family held controlling interest in the company. 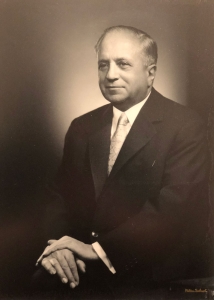 In 1961, an opportunity presented itself to Albert Flegenheimer to become a majority shareholder in Michigan Sugar Company as the Pitcairn Company was looking to sell its stock interest in the company. Later that year, his son, Ernest, joined his father and was subsequently elected to the board of directors. By 1962, Ernest was 2nd Vice President of Michigan Sugar Company. The following year, Albert stepped into the role of Chairman of the Board of Directors, while Ernest was elected President and Treasurer.

The Flegenheimers not only wanted to lead Michigan Sugar Company, they wanted to improve it. This included attending hearings on legislative matters pertaining to the sugar industry and inspecting other sugarbeet fields and factories not only in the United States, but as far away as Belgium. From these research expeditions they developed more efficient ways to run the factories.

Starting in the mid-1980s and continuing for the next 20 years, the two remaining companies were involved in a series of acquisitions and mergers.

Now, the two companies who for most of the 20th century viewed each other as fierce competitors were one grower-owned cooperative: Michigan Sugar Company.

Today, Michigan Sugar Company is the only remaining sugar company in the state. It is the third largest in the United States. It has nearly 900 grower-owners, 980 year-round employees and 1,100 seasonal workers. It generates more than one half billion dollars in direct economic activity annually in the local communities in which it operates. Its combined factories have a beet slicing capacity of 22,000 tons per day and an ability to produce more than 1.2 billion pounds of sugar each year, which it markets under the Pioneer Sugar and Big Chief Sugar brand names.

As it was more than a century ago, Michigan Sugar Company is once again “Locally Grown. Locally Owned.”